To determine the right replacement for an existing driver, there are
four pieces of information that you will need:
1. In what type of luminaire is the LED Driver being replaced?
While you may not need the exact dimensions of the driver, it’s
important to take note of the type of luminaire that the LED Driver
was installed in. Taking a quick measurement within the luminaire
will also give you the maximum size of the replacement driver
to ensure that it will fit properly. For maximum flexibility, look for
manufacturers that offer a variety of LED Driver Can sizes to fit
different forms.
2. Is the LED Driver Constant Current or Constant Voltage?
Constant Current LED Drivers are found in everything from
outdoor, general indoor, specialty, and architectural lighting. If
there is a question, Constant Current lists voltage as a range
(examples: 2-42V, 14-30V, 8-19V, etc.) and a specific output
current or current range while Constant Voltage drivers list a
specific voltage like 12V or 24V.
3. What are the LED Driver Output specifications?
If the voltage and current requirements of the modules are not
listed in the luminaire, there are three specifications to look for -
Current (mA), Max Power (W), and the Voltage Range (V).
a. Current (mA): Equivalent to specified or up to 10% less
than the mA rating. Any less than that and there may be
a detectable difference to the light level in the fixture as
compared to the other installed fixtures.
b. Max Power (W): Equivalent to what is specified or higher.
Max Power refers to the available amount of Watts, not
necessarily what is used by the LED modules.
c. Output Voltage (V): Refers to the output range of the LED
Driver. This may be listed only as a max voltage.
4. Are there any control requirements?
Most of the Universal LED Drivers are equipped with 0-10V
dimming. A dimming driver can always be used for applications
where no dimming is required. 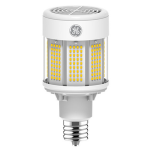